You, like most Mainers, are probably wondering where all of this heroin suddenly came from. One day it seems like the extent of no smoking zones is the biggest drug policy issue, and the next you’re reading about a record number of overdose deaths in Maine. 63 in the first half of 2015 between heroin and the related fentanyl, on track to meet the record of 100 set last year. Unlike many things, this is not entirely overblown media hype. Heroin use and the resulting overdoses have increased substantially in rural areas in many parts of the country.

The reason is simple: heroin is dirt cheap right now. The price of opioid prescription drugs like OxyContin have skyrocketed due to high demand and a change in chemical formulas making them less effective for getting high. Many of these users have turned to heroin, which, at about $10, is currently going for about 1/8th the price per dose. The effect is apparently related given their similar derivation (they both originate from opium poppies), but heroin is now cheaper and more accessible.

Supply and demand is the culprit. Demand has increased somewhat, but this has been vastly outpaced by the increase in supply. Global opium poppy cultivation and heroin production have reached record levels. The three top areas for opium cultivation are the “Golden Crescent” of Afghanistan, Pakistan, and Iran; the “Golden Triangle” of Burma, Thailand, and Laos; and Mexico and Columbia. Afghanistan alone produces the vast majority—about 85%—of the world’s opium.

However, it is the increase in opium cultivation in Mexico and Columbia that has the largest impact on the U.S. heroin price. The global heroin market is not perfectly integrated, so while those countries in Asia produce immense amounts of heroin, almost all of it stays in the Eastern Hemisphere. An increasing amount is making its way to the U.S., but it is still relatively little. Therefore, the Latin American production has a disproportionate impact on the price of heroin here in the U.S. Some have linked the trend of increased opium cultivation in Latin America to the legalization of marijuana in some U.S. states. Demand for illegal marijuana smuggled into the U.S. has fallen, and enterprising farmers, the thinking goes, are replacing their marijuana crops with opium poppies. There is not much data to confirm this link yet, but it does make a certain amount of sense based on the anecdotal evidence available. Whatever the cause, heroin production in Latin America is clearly increasing. 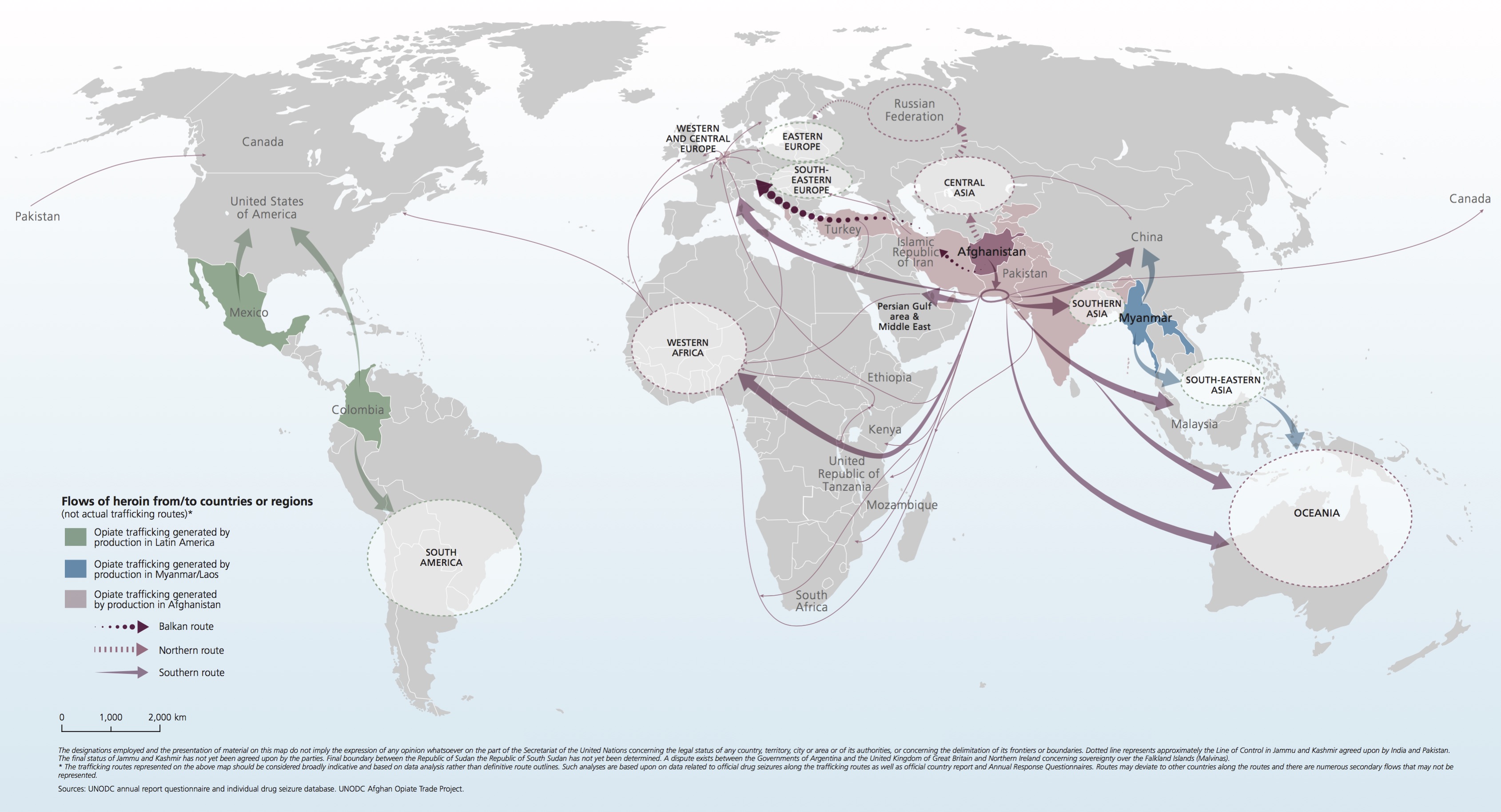 While the typical nature of opium farms varies, from small family farms in Afghanistan to borderline corporate operations in Mexico, the high incentive for farmers to partake in the trade is common across the producing countries. In Afghanistan, for example, farming typical agricultural goods is not a recipe for success. There are few market outlets for most agricultural goods, and even when there are, there is little money to be made from them. Government attempts to provide easier market access and higher prices have been unpredictable and therefore ineffective. Opium poppies, on the other hand, are much more lucrative. A farmer can make around four times as much money selling the opium to middlemen who consistently come to their farms to collect it. There is a risk of a government anti-narcotic program wiping out one’s crop, but it is relatively low. For farm laborers in Mexico, opium harvesting is the best-paid work around, at 30$-40$ a day. The government is also working to eradicate opium farmland there, but it is not enough.

We will likely have to look at other points in the heroin trade for ways to reverse the falling price trend. Seizing heroin in transit and disrupting endpoint distribution would be other contenders on the supply side. On the demand side, there are treatment and prevention measures. Disrupting endpoint distribution, i.e. busting drug dealers and their networks, is Governor LePage’s apparent goal. His plans for increased law enforcement follow along these lines. I know relatively little about the potential impact of these measures, but it seems unlikely that simply having more agents and money at the state and local level will solve the problem alone.* As for treatment and prevention, Portugal is often held up as an example of how successful that can be. But again, it seems unlikely that it would solve the problem of heroin’s prevalence in Maine on its own.

Stopping heroin between the farm and final sale seems to be where most of the action happens on the supply side. If I were to register my decidedly non-expert opinion, this is what could have the largest impact on price in the short term given how much is confiscated. An ungodly amount of heroin and morphine is seized in Southwest Asia: 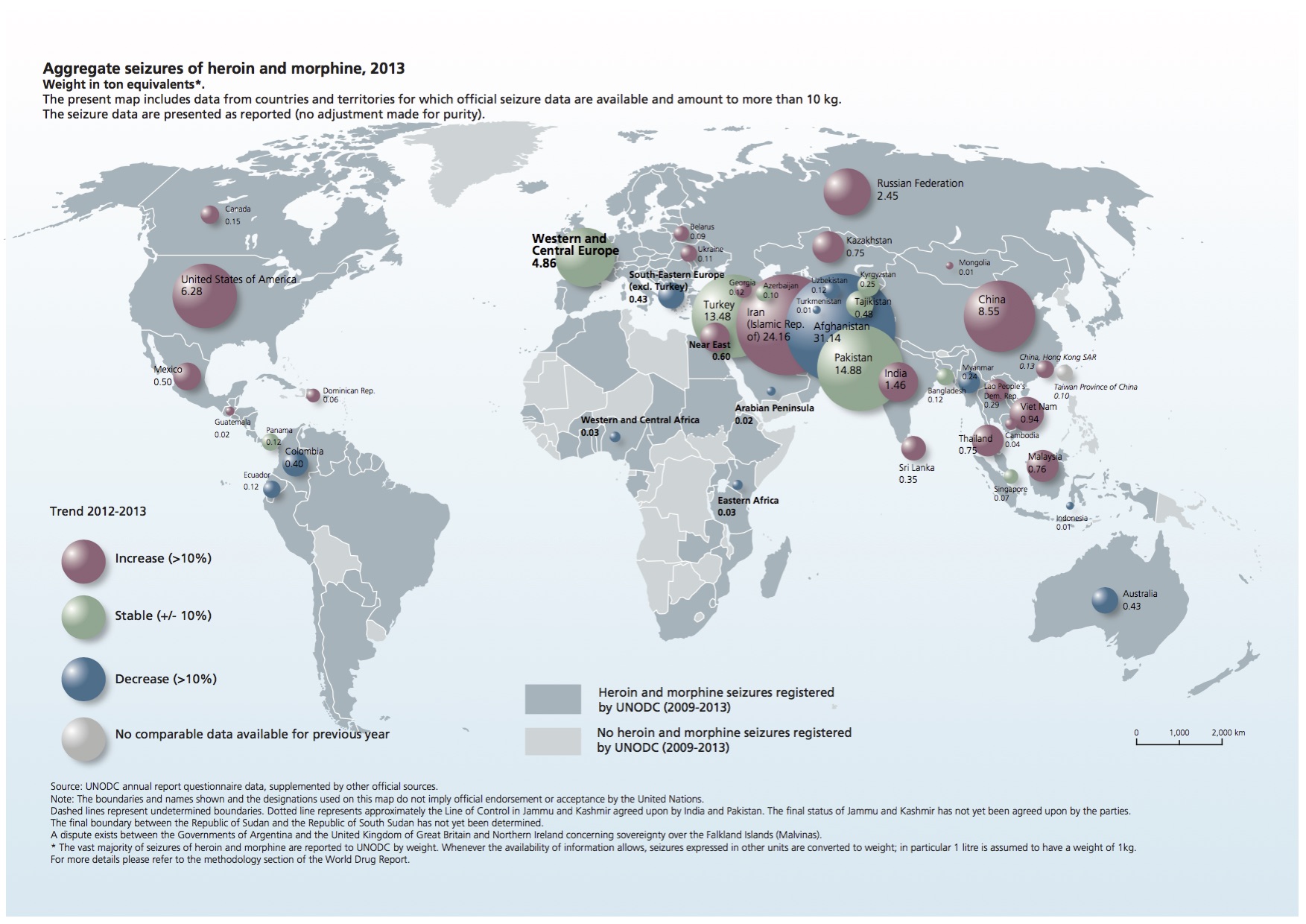 Big bubble = a lot of seized heroin and morphine. Click for full image.

The U.S. seizes the 3rd most opium and 6th most heroin and morphine in the world, which amounts to only 6% and 5%, respectively, of the global totals seized. Iran far and away seizes the most opium at 436 metric tons in 2013, 69% of the total. Afghanistan has recently taken the lead in seizing the most heroin and morphine, at 31 tons in 2013, or 27% of the total. Just looking at heroin, it is clear that seizures do make a dent. Global heroin production was estimated at 526 metric tons, while seizures in 2013 were a little under 80 tons, or about 15%. Not earth-shattering, but if it occurs at certain junctures in the trade, it can have a substantial impact on the price. It is worth noting that the U.S.’s seizure rate, while much lower than Asia’s at only 6.2 metric tons, is potentially impactful since the amount of heroin produced in Latin America (trafficked exclusively into the U.S.) is also much lower than in Asia.

It can be tough to be optimistic about the potential impact of law enforcement (especially when officials say things like “You can take out a large portion of the vertical chain and it’ll have no effect on the final market — the consumer”), but there have been instances of single actions having a large effect. Part of the current spike in deaths is due to the cutting of heroin with fentanyl, an opiate 30-40 times as powerful as heroin that dealers sprinkle in to make a “better” product. The last time the U.S. grappled with fentanyl was a two-year period beginning in 2005 that saw 1,000 deaths from it. But that subsided when a single illegal fentanyl production shop in Mexico was shut down by authorities. Heroin production is more dispersed than fentanyl was then, but it is still possible that stopping key producers, smugglers, and dealers could have a real impact on the trade.

It is hard to say what the best solution to the problem is; there will likely be no silver bullet. From efforts to increase treatment in Maine to providing better alternatives for farmers in Mexico to tackling smuggling networks everywhere, the issue covers a lot of ground. Ultimately, ending the wave of heroin will require many moving parts around the world to move in the right direction. Let’s hope that happens soon.

Most information, if not specifically linked to otherwise, is drawn from the UN Office on Drugs and Crime’s 2015 World Drug Report.

* The dealing game has also changed apparently, with drug dealers eschewing the turf system as seen on TV for a more fluid, and ultimately more lucrative model of making car-to-car swaps and delivering to people’s houses.