Heating fuel prices in Maine are at their lowest point in ten years. Given how much Mainers spend on energy (the 3rd highest in the nation per capita), this is good news for people’s bank accounts. A year and a half ago, heating oil prices were double what they are now, so one could not be blamed for wondering how we got here. The answer, as ever, lies beyond Maine’s borders.

Oil tends to be the most attention-seeking of commodity markets, always hitching a ride to major global events of the day, from wars in the Middle East to Great Recessions. Any major change in oil prices can be traced back to that year’s headlines, and this time is no different. Here are the three largest factors behind the current price drop:

Oil production in the U.S. in 2014 saw the highest growth rate in absolute terms since record keeping began in 1900, and the highest percentage gain since 1940.

The production increase is due to a boom in shale oil extraction in North Dakota and Texas. Shale oil is the aptly named product made from oil shale rock. Unlike the extraction of typical crude oil, which just involves pumping liquid oil out of the ground, oil shale rock is a solid that needs to be converted into liquid before it can be substituted for crude oil to make usable fuels like gasoline. The process is much more expensive than crude oil extraction, so investing in shale oil production only became profitable when oil prices were high over the last few years. As companies made these investments, the resulting increase in oil supply contributed to its drop in price. But now the other factors detailed below have pushed the price down below the point of profitability for shale oil, so companies are looking at having to decrease production.

However, part of the budget deal passed by Congress last week may prevent American oil companies from having to slow down. The bill included an end to the ban on crude oil exports that has been in place ever since the 1973 OPEC oil embargo. The export ban benefited U.S. oil refiners, since they were guaranteed a low cost supply of oil, but was a detriment to producers, since their market was severely restricted. The lifting of the ban will likely not do much to affect price in the short term due to infrastructure limitations, particularly because the extra shale oil supply does not have much of an international market yet. In the long term, the impact on price could go either way, but an Energy Information Administration report said the end of the ban is likely to either lower U.S. energy prices or leave them unchanged.

The Organization of the Petroleum Exporting Countries plays a major role in controlling the global oil market. Its thirteen members control about 80% of the world’s proven oil reserves, two thirds of which is in the six Middle Eastern member countries. As we learned during the 1973 embargo, OPEC can wield a lot of power when it wants to. Their primary function in practice is to maximize profits for oil exporting countries, and their main tool is changing the amount they export, thereby affecting the global price. Normally when the price falls, they respond by restricting supplies to steady it. This time, however, they have not done so. There are two reasons why, one explicit and one speculated. The first, explicit reason is to undercut the aforementioned increase in U.S. production. The shale oil boom, especially in combination with the end of the crude oil export ban, means the U.S. will be cutting into OPEC’s business. Given that shale oil is expensive to produce, the idea is that the low prices will discourage further investment into U.S. oil production, therefore protecting OPEC’s business. U.S. producers were certainly feeling the pressure, but the lift of the oil export ban could prove to be a major wrench in the plan. The second, speculative reason is that Saudi Arabia, at the behest of the U.S., is trying to hurt Iran (who is also an OPEC member) as they ready to export more oil after sanctions are lifted, as well as Russia. There is no real evidence to support this idea, although it wouldn’t be particularly surprising with regards to Iran, since Saudi Arabia is not a fan of them to say the least. Whether it’s at the request of the U.S. is questionable. 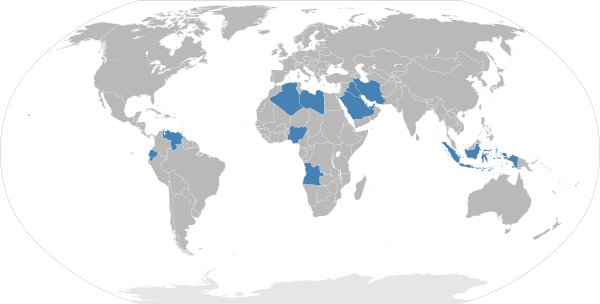 OPEC’s failure to restrict supplies shows that it is not a unified body, as the policy has been driven entirely by Saudi Arabia and the other gulf states. Even Saudi Arabia is racking up debt with prices as they are, but they are betting that the move to damage U.S. production will help them in the long run. Other petrostate members have been hit harder by the low oil prices, and at least in one case have experienced serious political change because of it. Venezuela’s Chavistas maintained their hold on power largely via oil profits, and as that revenue stream dried up, their already unstable economy tanked. The people showed their disapproval on December 6th by voting the Chavistas out of office for the first time since 1999 despite the numerous ways the election was set up in their favor. The low oil prices have also been a serious strain on Russia, whose economy has been struggling for a while. However, there have been few signs of these economic woes weakening Putin, even if the country as a whole is hurting.

Sanctions against Iran are likely to be lifted early next year as part of last July’s nuclear agreement. The sanctions will only be lifted once certain steps to reel in Iran’s nuclear program are completed, but they look to be in a hurry to do so. Iran is the second largest oil producer in the Middle East after Saudi Arabia, but they have been unable to export to most of the world because of the sanctions. Currently they only sell oil to China, Taiwan, Japan, South Korea, India, and Turkey, and even those countries have reduced the amount they are purchasing from Iran. Therefore, Iran has been unable to sell much of the oil it can produce, and it has been unable to make the investments necessary to extract more. The lifting of sanctions will allow them to sell more of what they already have and put that money back into opening up new oil fields, further increasing global supply and driving prices down. While the sanctions have yet to be lifted, the mere fact that they will in the future has already put downward pressure on the price of oil via market speculation.

Finally, one thing that is sometimes incorrectly cited as a direct reason for the oil price drop is China’s slowing economy. While China is facing serious economic issues, and it’s easy to make the connection that their economic troubles would result in lower oil demand, this has yet to happen. The data so far shows that their oil demand has only grown. Of course, due to the magic of financial speculation, it is true that China’s stock market crash earlier this year led to a fall in oil prices, since people expected China’s oil demand to drop along with the Shanghai Stock Exchange. But it didn’t. China has been using as much oil as ever, so has yet to directly contribute to the low oil prices.

The way things look now, oil prices will stay low for the foreseeable future. Even if Saudi Arabia changes tack and restricts supply, Iran’s entry into the market and a continued push for more U.S. production will keep prices fairly low. So go ahead and take those heating oil savings and buy yourself something nice. Like some solar panels.

For a look at oil prices over time, I would highly recommend this interactive graph by the New York Times.